I'm so happy to say, Kalia's dresser is finally finished!  It took us a few solid weekends to build it, and it took lots of days and nights in the garage to get it finished paint wise, but it's done!  Painting was about a billion step process...so get ready for an overloaded picture post!

First up, we taped and primed the dresser and the drawers.  We used Kilz water based primer...I don't really prefer this over other primers in general, but I need to use water based because of Kalia, so it gets the job done. 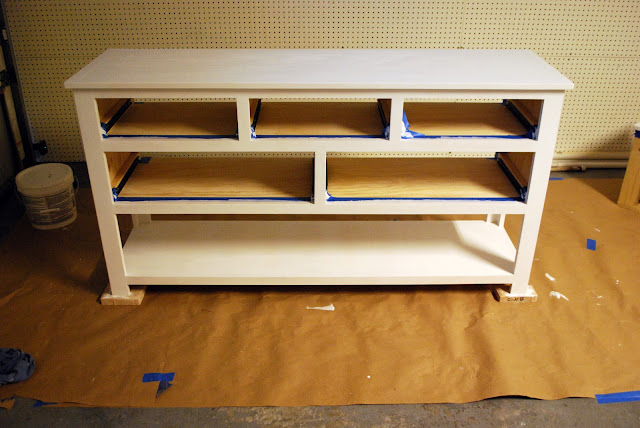 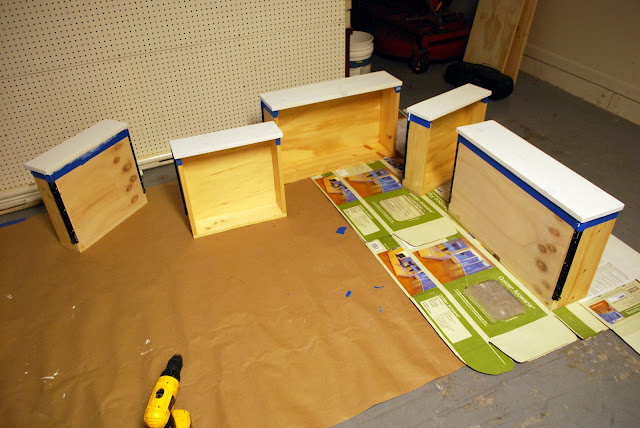 Next up, we painted the dresser with two coats of the same blue from Kalia's closet.  I think this picture is just the first coat, so just picture the second coat with a little bit deeper of a color! 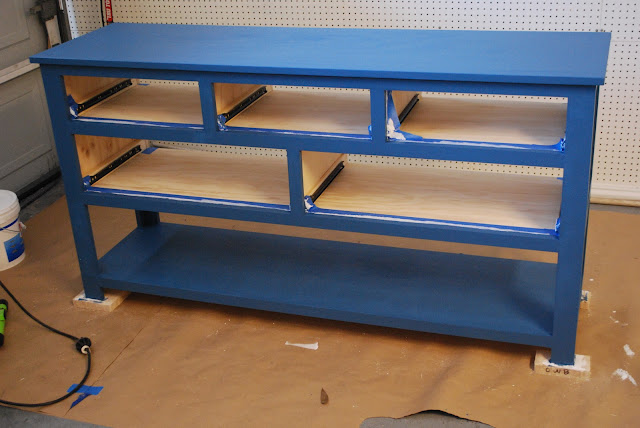 Here's where the fun part came in, and Chris exited stage right.  Well, here's where the creative part came in anyways!  I didn't exactly know what I wanted the finished product of this to look like.  I wanted to tie in all of the exisiting pieces in Kalia's nursery...the crib, the daybed, the alphabet wall, the bookshelves, and her closet system.

First I attempted to dry brush on some grey paint and followed that up with more dry brushing of a mix of white and the same blue that her dresser is painted, and distressed the edges of the drawers. 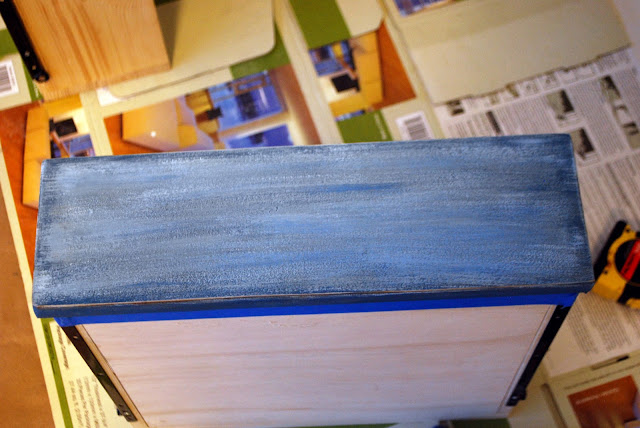 It wasn't bad, but it wasn't the look I was going for.  And replicating this on the entire dresser was going to be a pain in my rear.

Next, I painted over a different drawer front with the grey color from her walls... 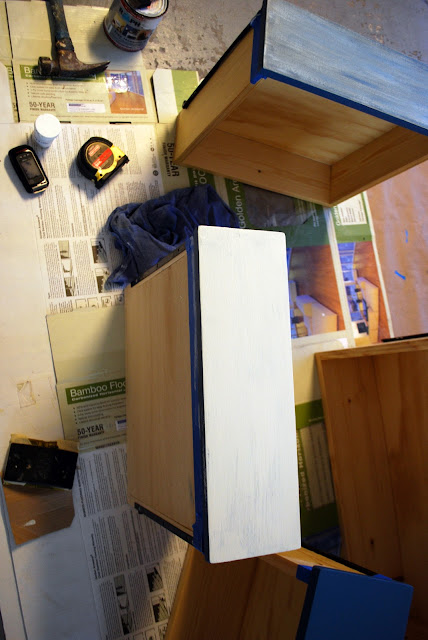 And then when that dried, I sanded both drawer faces down to see if I liked either one of those looks.  I didn't worry about getting an even coat of the grey above because I knew I planned on sanding to allow the blue to show back through. 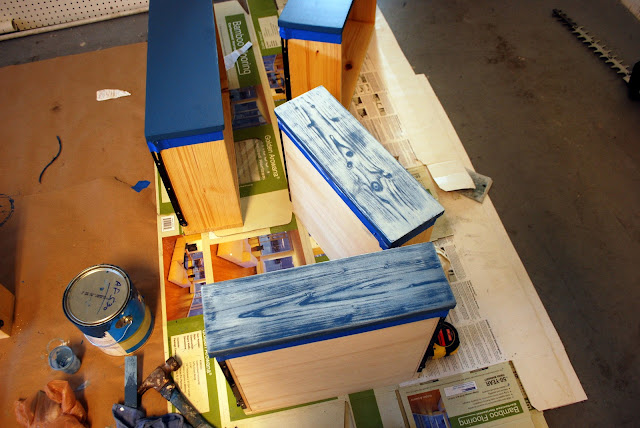 Hmph.  Both of these are sort of cool in their own rights, but still not the look I was going for.  Third time was a charm though!  I decided I wanted something a bit more subtle, but that still added depth and dimension to the piece, so I mixed up a 'white wash' (really a grey/blue wash) of 8 parts water, 3/4 parts grey and 1/4 part blue. 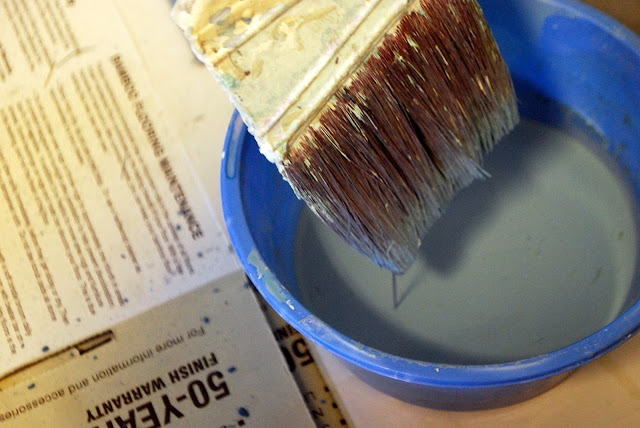 I didn't worry too much about the paint brush getting fully dry.  I made sure I wasn't slopping water around everywhere, and then wiped this on the drawer front. 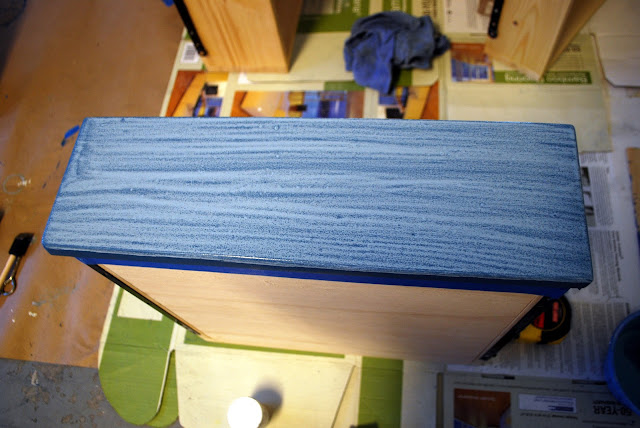 Then I took a soft rag and wiped off the excess in the direction of the wood. 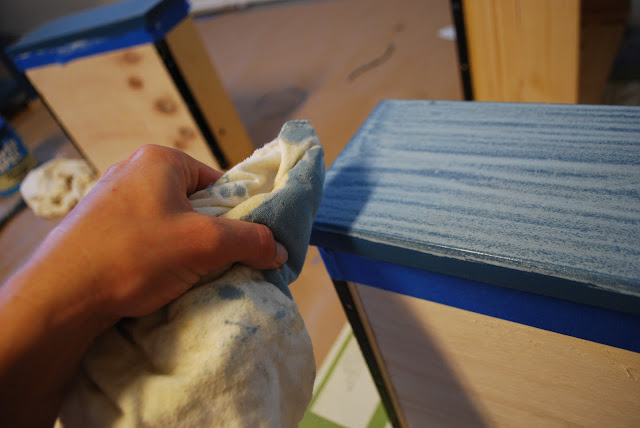 To end up with this : 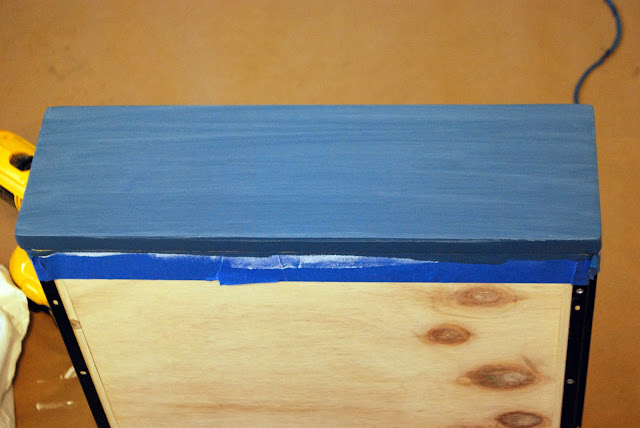 Which I finally liked!  After I repainted over my other two experiment drawers with the blue again, I applied this white wash to all of the drawers and the entire dresser.  I actually had to have Chris do the white wash to the bottom shelf because I couldn't handle squatting or lying down with my new large and in charge body I'm carrying around these days.  I tried to just roll with whatever outcome happened...worst case, we can go back and refinish this dresser later!

Next up, I wanted to add glaze.  I wanted sort of a modern vintage feel, and I debated about going back and taking my sander to the edges of everything, but decided since we had done such a nice job at avoiding drips and painting those edges, I'd just add the glaze for now, and perhaps go back and distress later.  You know, in case I'm bored and need something else to do ... ha!

I added glaze to the entire drawer, and wiped off the glaze from the front, but left the glaze concentrated around the edges. 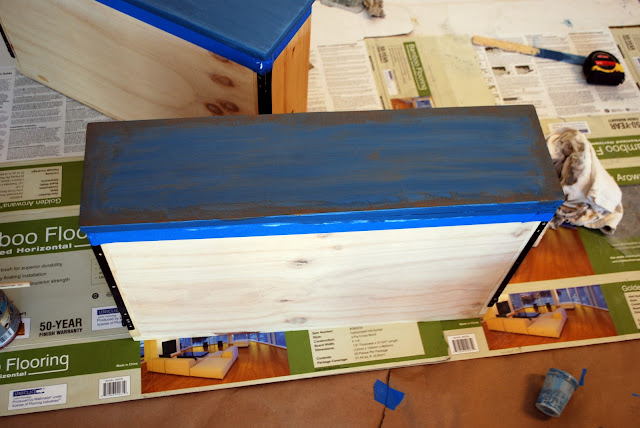 I wanted to leave a thick glaze border around the edges, but didn't want a clean line of glaze, so I used an old tee-shirt, and pushed the glaze to the edges of the drawer fronts until I had something I was happy with. 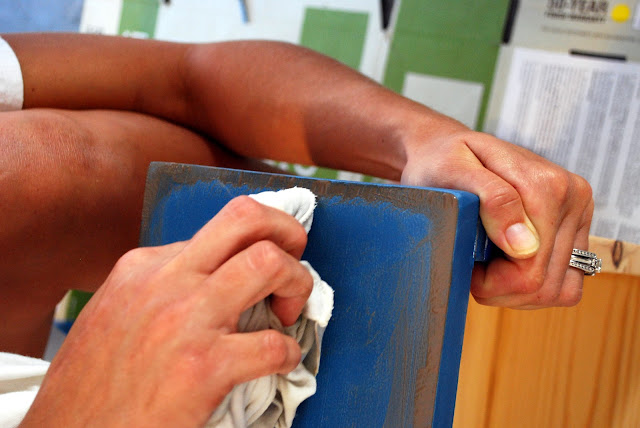 The glazing was the biggest pain in the rear part of this whole project.  I know this look isn't for everyone, but it definitely gave me the look I was going for.  I did this for all five drawer faces...here's the three small ones finished : 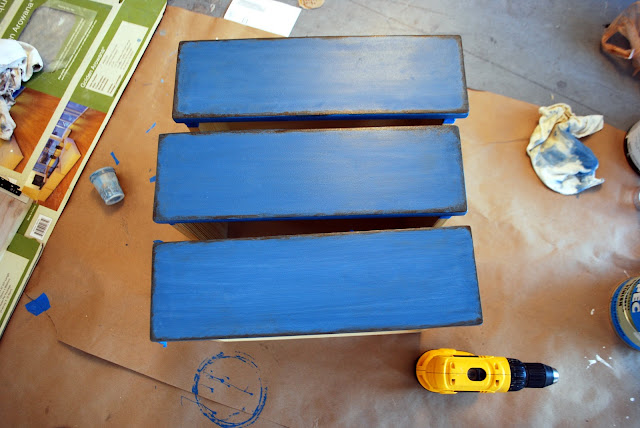 I feel like the glaze makes the blue pop against it.  After these were done, I glazed around the edges of the entire dresser.  Holy lots of work!!  Chris had to do the bottom shelf again, so he's learned a bit of painting technique.  I think he's on par with building, but his patience hasn't quite mastered the finishing work just yet!

At this point I stopped taking step by step pictures.  We had to move the dresser indoors because the AC people needed the garage, and I was just so ready to get this thing DONE!  We painted three coats of polycrilic on the top of the dresser and the drawer faces, and everywhere else got two coats.  I sanded with 220 grit sandpaper inbetween each coat.

On Saturday night, we installed the handles on the dresser, and I can't explain how happy I was to finally move the finished product into Kalia's nursery!

Ready to see how it turned out?! 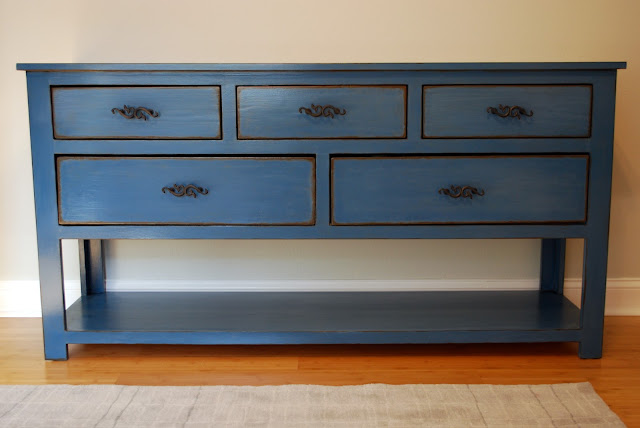 Pottery Barn had sent me a $25 off $50 coupon, so I ordered three different sets of handles, but decided these ones tied in best with her room.  They give the straight lined dresser a little bit more of a feminine feel and tie in nicely with her crib. 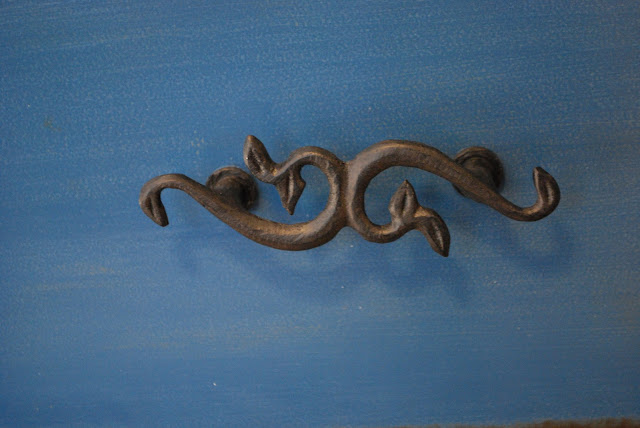 I also like that they fit the 'feel' of the dresser and compliment the glazing really well. 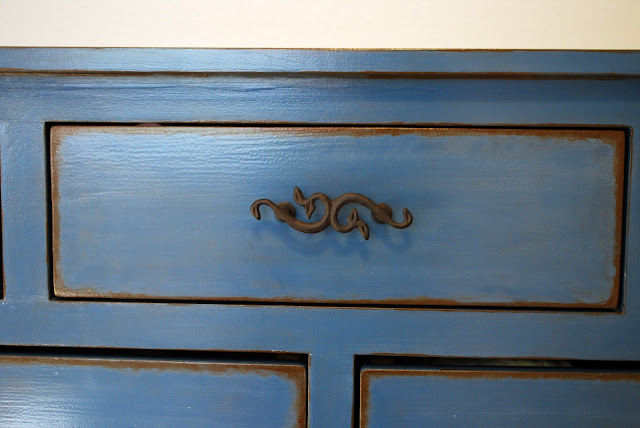 I added two of the baskets that I had gotten from my baby shower to the bottom of the dresser, and then put up these two picture frames I picked up a little while back from Z-Gallerie.  I'll put pictures in there before too long. 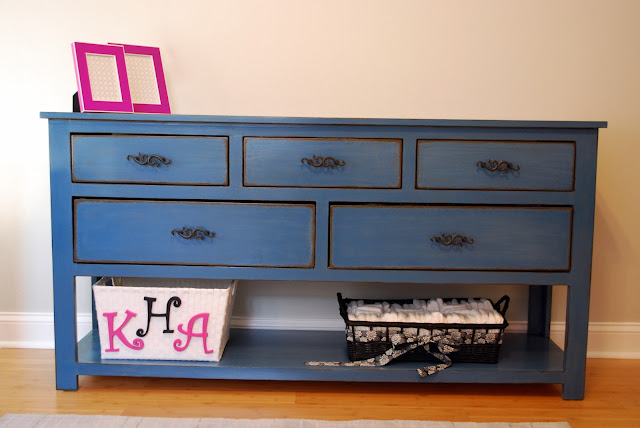 The diapers in the basket on the right are from the diaper cake I also received at my baby shower.  Diaper cakes are so fun as decoration, but man oh man, unrolling a million newborn sized diapers sure is a lot of work!

Here's the view when you first walk in Kalia's room: 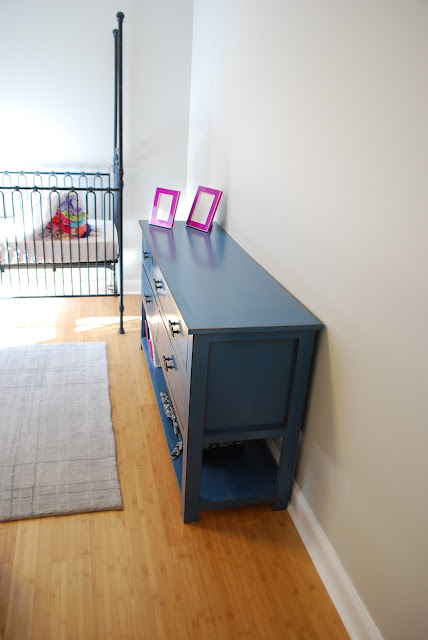 And here's how the the dresser ties in with the crib : 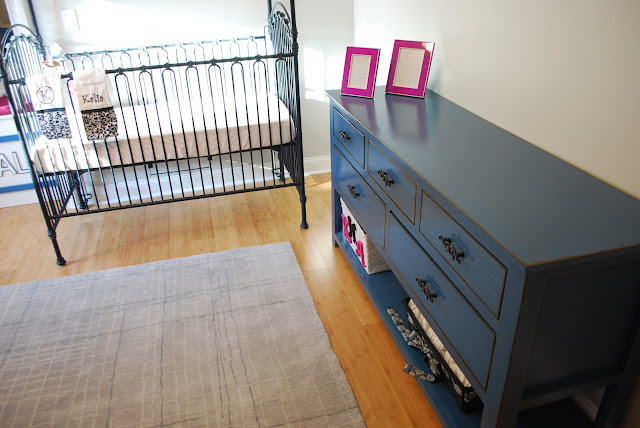 Here's how it ties in with the daybed and alphabet wall : 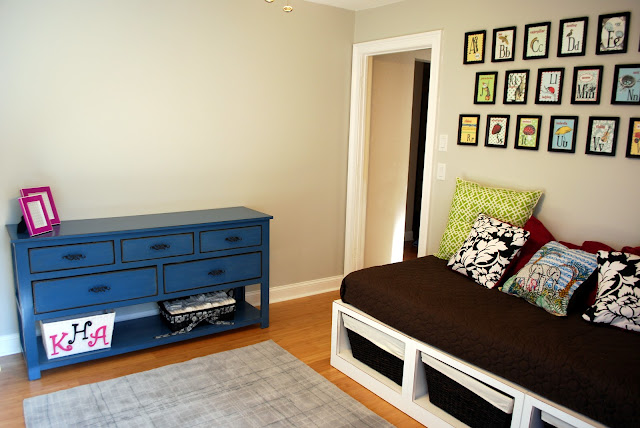 And here's an attempted shot at how the three tie in together.  It's not the best, but you get the idea! 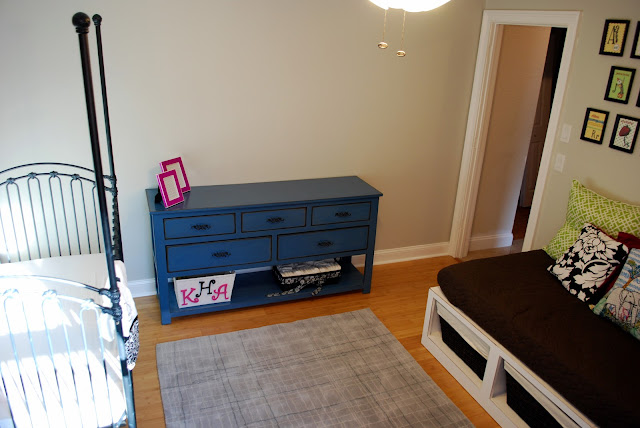 Next up for the nursery...adding wall decor above this dresser!  Hopefully I can work on most of that project without causing too much stress on my back.  I started my 8 month of pregnancy today...time is a tickin'!

So what do you think?  Do you like the final outcome of the dresser?!  Every time we walk into her room, we love it more and more.  This nursery sure has been a labor of love!

One reminder ... here's where we started with this wall : 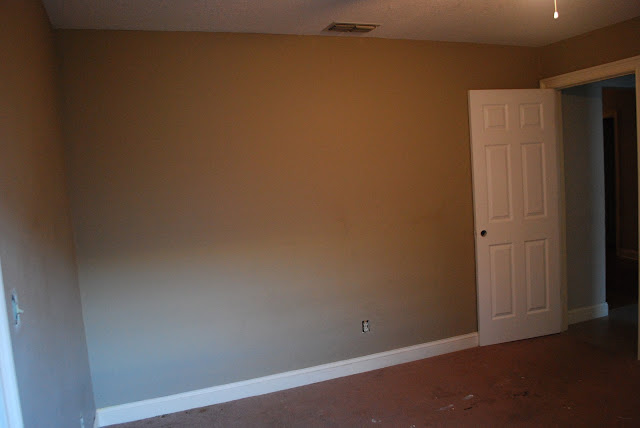 Hope everyone had a great weekend!  Happy Monday!

To see all things nursery related, click here.  To see the paint colors I used, click here and scroll to the bottom.


I'm linking up to the parties on my sidebar!
Posted by Kara at 6:40 AM