As I mentioned in this post, all of my projects I'm working on right now are to fill my giant floating living room wall.

I saw these plans from Anas at Knock-Off Wood's website for shelves made from a pallet of wood, and I knew I wanted to make some.

So I looked on craigslist, at my local stores, EVERYWHERE, and couldn't find any pallets. Seriously? How hard can it be to find something that most people just throw away?! Hard...but I think only when you really want it.

And then the pallet god came answering (insert sounds of ringing angels here). While I was in the process of starting on my daybed, the delivery guy showed up with something that I knew we were taking back...and it came on a pallet. I was seriously ECSTATIC when he left and the pallet stayed. Chris thinks I've lost it...I called him shrieking about actually having a pallet to be able to do the shelves with. 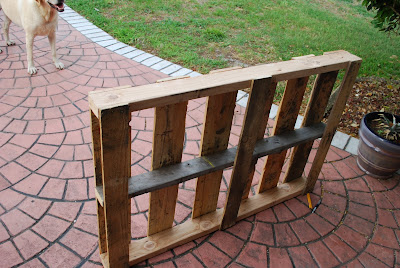 I measured both ends to be the height I wanted, and took my trusty jigsaw (at one point, I'm pretty sure that was Chris's trusty jig saw...it's now safe to say it's mine), and got to cutting.

Chris supervised some at the beginning (along with Kodi in the background) to make sure that I could actually cut the pallet without cutting my fingers. 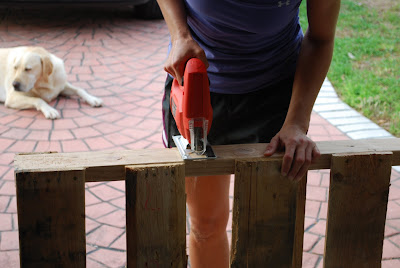 See babe, I did just fine! 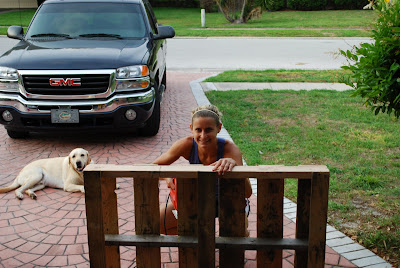 I then measured 1x4's for the bottom and cut those with the jigsaw and nailed them into place. I actually had to run to Home Depot because I didn't have long enough scraps of 1x4's left over from my previous projects. Just an FYI, there's a 'scrap' bucket at Home Depot of wood that they sell for super cheap. I got a 4 ft board for 50 cents! 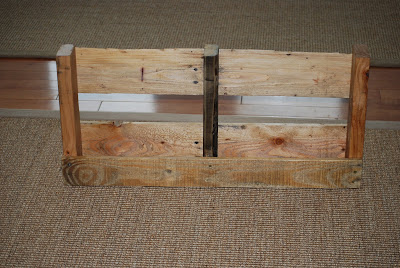 Which I liked and was happy with...until I got it on the wall. I let just one of them sit on the wall for a day to see if it would grow on me. It just looked ... kind of blah with the color of my wall and the rest of my decor.

So, I gave it some good 'ol Kara lovin. I sanded the edges and took my foam brush and put some stain on it. Yeah yeah yeah, you're supposed to stain, then apply poly, but I've never been one to do things the right way anyways! 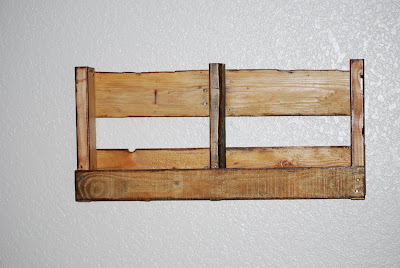 The worst part about this project was actually hanging these. They're heavy. Really heavy. They needed to hang on a stud in the wall, and I still wanted them to be relatively symmetrical on either end. 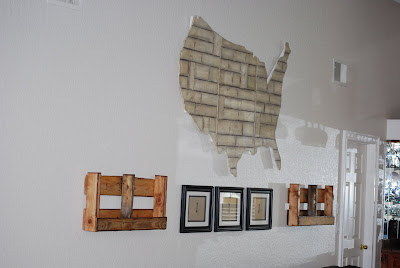 I really don't like the look of my tables or counters with clutter on them, so I put the magazines (my inspiration for a lot of things) that I had sitting out in one side, and put my coasters, TV remotes, and the book I'm currently reading in one side. The other pallet wound up with a lot of magazines as well. Can you tell which one is Chris's favorite?! 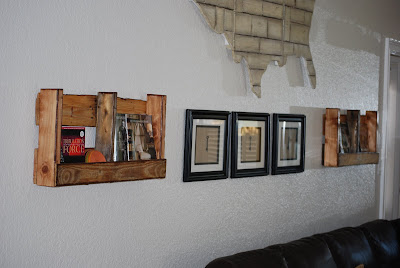 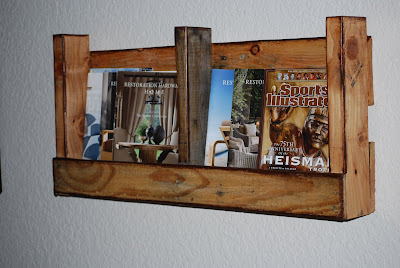 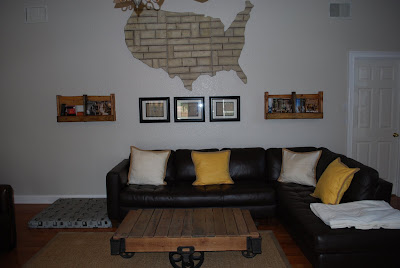 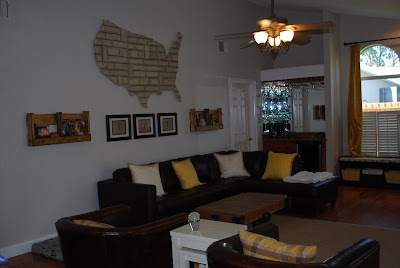 My project that I'm starting to absolutely hate is supposed to fill the space above these pallet shelves. I'm not sure that I'll leave magazines in the shelves, or if I'll make something else (I've got ideas!!) to go in there. I like it for now though! Now, if my final project for this wall could just fix and finish itself...  In the meantime, I'm linking up to these fun parties...go check them out!